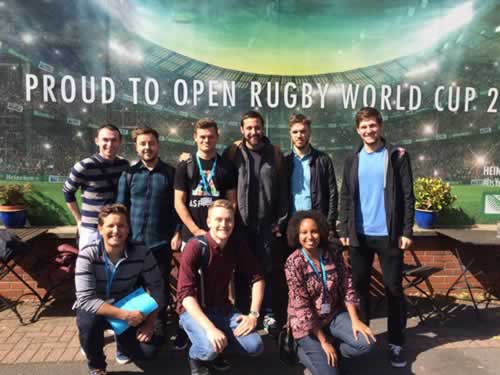 The class of 2014-15 have not only impressed the staff with their NCTJ exam results (our best year so far!) and some prize winning journalism, but many of them are already securing jobs in the media.

At the time of writing (Autumn 2014), we can report that Simon Collings is a full time reporter for sports news agency, Hayters.  In the spring, Siobhan McCall won the highly coveted graduate internship at Sky Sports News. She is now on a full time contract. Lucy Lomax secured a job with Harlequins Rugby Club in their communications team. Grant Miles is Social Media Editor for Mail Sport Online and works freelance for Sky Sports News and FootballFancast.

Beth Shine has taken a communications job at the Lawn Tennis Association.  After completing his documentary on football in Mongolia, Neil Kingston is doing shift work at Mail Sport Online.  Emma Webb was writing for Sky Sports News this summer, but is now applying for full time jobs elsewhere.  Louise Warr is continuing to work at Saracens Rugby Club on a part-time basis.

After completing his documentary on Club America in Colombia, Gerardo Lemos returned to London to continue working as a foreign correspondent for Colombian television station NTN 24. He is also picking up some freelance work in London too. Ben Grounds, this year’s winner of the Alan Skeehan Prize (trainee reporter of the year) is working for the local press in North London and blogging on sport.  Giulio Gasparin returned to Italy in the summer.  He continues to cover the women’s WTA tennis tour, while he looks for a permanent job.  Lara Seychell is finishing her documentary on motorsport in Malta. Justin Feck is getting shift work on the Daily Mail picture desk and working at BT Sport rugby on mactchdays. Adam Stephens  has secured an internship with Graphic News.

We will provide further updates on their progress early next year.