On a pan-flat, 40km course in Doha, the German rider reclaimed the crown that he won for three consecutive years between 2011 and 2013.

Both men had been in good form leading up to the race, but finished in a disappointing sixth and 11th place respectively.

Reigning world champion, Belarusian Vasil Kiryienka, came closest to toppling Martin but could only manage a time 45.02 seconds slower than that of the 31 year-old German.

The fact that Martin’s time of 44:42.99 was faster than nine of the teams in Sunday’s men’s team time trial demonstrates the the sheer quality of this ride.

Martin was delighted with his dominant winning performance, stating: “It’s amazing. I can’t believe it. Everybody knows that I haven’t had a good year. But this makes everything OK. The course was made for me.

“The only thing I was scared for was the heat. But I made a great preparation at home and with the team here. I was really strong in the head, I was not the favourite, I had no pressure.”

With a flat parcours offering no inclines to negotiate, the main obstacle that the riders had to contend with was the blistering heat of the Qatari capital, with temperatures reaching almost 40℃.

Martin’s preparation reportedly consisted of training in the bathroom with the heating on in a bid to acclimatise himself to the harsh conditions of Doha.

Martin’s return to form in the last couple of months after two years in the wilderness has been largely attributed to a change in riding style.

After a disappointing Olympic time trial where he finished 12th, Martin took the decision to revert back to the position on the bike that won him three world championships on the bounce.

The position, with his arms lower on the handlebars, compromises his aerodynamic effectiveness to create additional drag while riding.

However, talking to Radsport News, Martin explained: “I feel much more comfortable again. One has to accept that the aerodynamics are not everything, but the comfort factor plays a very, very important role. If your body does not work well, then whole aerodynamics thing means nothing.”

Martin’s gold continues a perfect week for himself and team Etixx-Quick Step, who won the championship’s opening race, the men’s team time trial.

However, his work is not done yet. In Sunday’s road race, he will be employed as the engine of the German team, working to set up a win for his sprinter compatriots, Marcel Kittel or Andre Greipel. 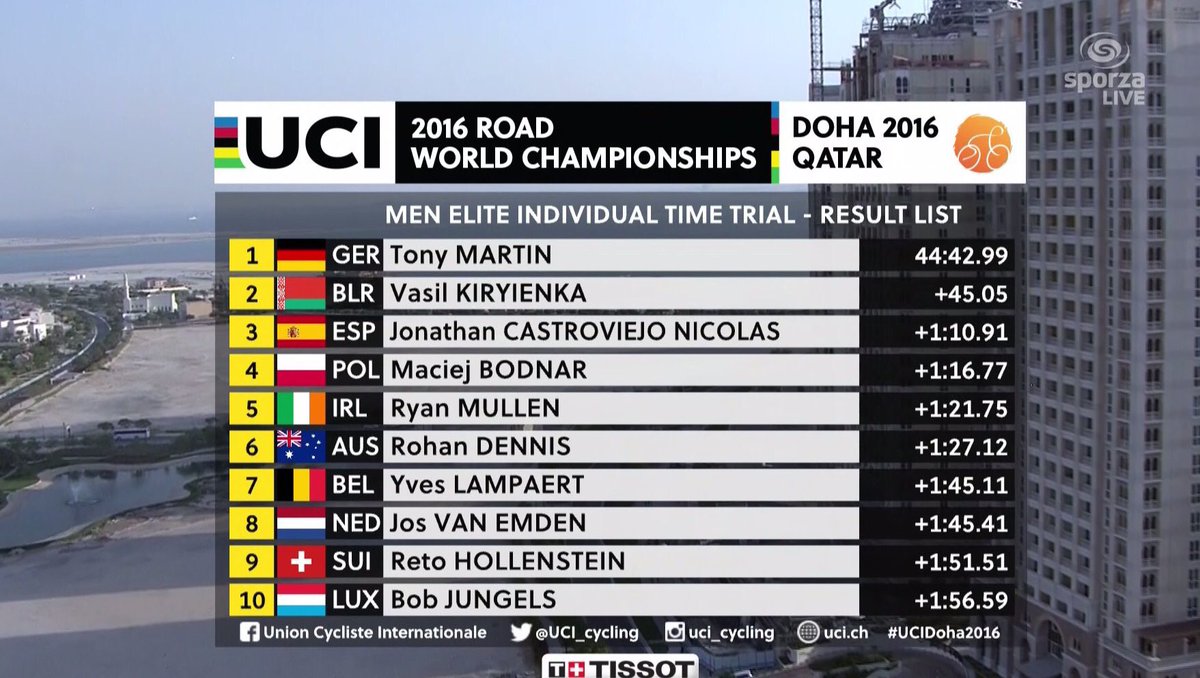