LA Rams are a hit at London School Community Event

Ahead of this weekend's international series game against the New York Giants, players from the Los Angeles Rams helped spread American Football in an event with school children from London.

Players from the Los Angeles Rams helped teach children from a London school about American Football at a community event in Guildford today.

The event featured four players from the team as well as cheerleaders and the team's mascot, Rampage.

In total, 107 children from Oasis Academy in Croydon were involved in activities including: passing, tackling, and catching.

The players spoke about how positive it is to see so many young people in the UK enjoying their sport and how encouraging it is to see the game growing overseas.

For many of the players, three of which were recently drafted rookies, the trip to London represented their first ever visit to the United Kingdom.

Wide receiver Michael Thomas expressed his delight at being in London, saying: "It's my first time ever out of the country, I think maybe Dallas is the furthest I've travelled before."

The Rams also attracted some major media coverage from the United States. The NFL Network sent Hall of Fame running back and former Ram, Marshall Faulk, down to interview some of the players about travelling to London and the team's chances this weekend. The 90-minute session was run in association with NFL Flag, an organisation who were set up to promote the sport through non-contact, continuous action.

Through a series of short, engaging activities; such as a crossbar challenge, a throw and catch exercise which required some player involvement and drills involving a tackle bag, the organisers were able to demonstrate the fundamentals of the sports whilst keeping the children both physically active and entertained.

The event is a demonstration of the NFL's commitment to getting kids active and was tied with their Play60 campaign; an initiative launched by the NFL in 2007 which is aimed at getting children to engage in at least 60 minutes of physical activity per day.

However, for Thomas and the Rams, the focus now shifts to the game on Sunday, with the Rams Receiver stressing the importance of ending their two-game losing streak and keeping their playoff aspirations alive.

Thomas Said: "We are doing our best to watch film and learn from what we did to lose those games but at the end of the day, we have learned from our mistakes and we are ready to play on Sunday."

On Sunday, the 3-3 Rams meet the 3-3 New York Giants in a game that will surely have playoff implications come the end of the season.

The game also marks the first ever time that an NFL game will be played at Twickenham Stadium as part of the NFL's constantly growing desire to expand the game in the United Kingdom. 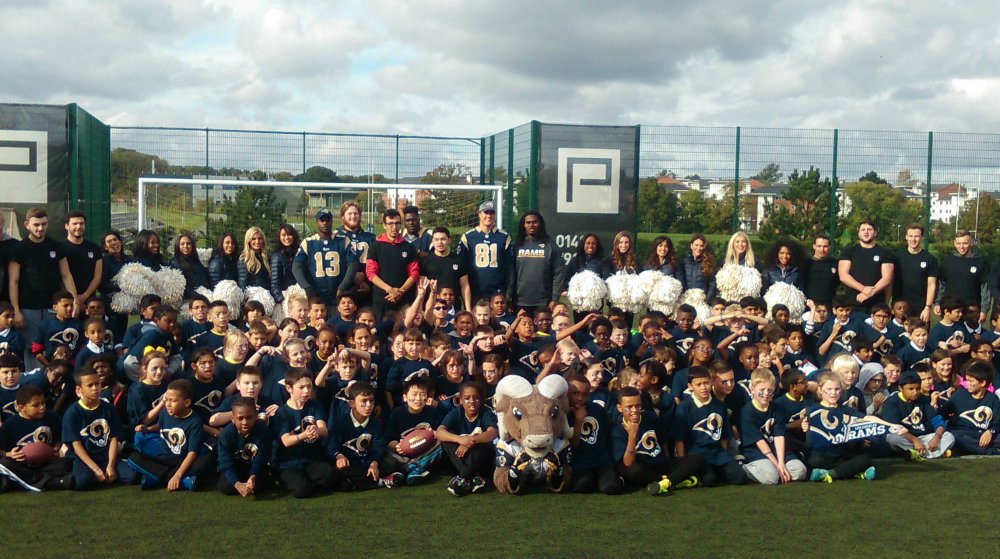