Andy Murray was today confirmed as the 26th men’s number one tennis player in the world since rankings began in 1973.

His top spot was confirmed when Milos Raonic, whom he beat in this year’s Wimbledon final, withdrew from their semi-final match-up in last week’s Paris Masters; a tournament that Murray went on to win.

With it, he breaks an incredible period of dominance from Roger Federer, Rafael Nadal and Novak Djokovic; who have shared the number one spot since 2004.

It’s a remarkable achievement, given that he is playing in an era that many agree has seen him pitted against possibly the three greatest players in history.

"I never thought I'd be number one in the world," Murray told the BBC.

"It's been many years of work to get here. It's been such a difficult thing to do because of how good the guys around me have been.”

A historic year began just under 12 months ago when a Murray-inspired Great Britain reached the Davis Cup final against Belgium.

This meant that if Murray defeated David Goffin, Great Britain would become Davis Cup winners for the first time since 1936.

Murray made no mistake, winning a gripping final 6-3 7-5 6-3 to send British fans into delirium.

Although every Great British player played their part in this momentous victory, it would be accurate to say that Murray carried the team.

He became only the third man to have an 8-0 singles record in a Davis Cup year, and with the doubles he is only the fourth man to win 11 rubbers in a single year.

In the early stages of the 2016 ATP season, Djokovic was completely dominant and beat Murray in the finals of both the Australian and French Open.

It was hard to see any player breaking Djokovic’s supremacy and the Serbian now held all four Grand Slam titles.

Djokovic, then, was naturally a clear favourite to win his fifth Grand Slam title on the trot on the pristine grass courts of Wimbledon.

However, Djokovic was shocked in the third round by USA’s Sam Querrey, leaving the door open for Murray.

Murray was largely clinical in his side of the draw and trounced Tomas Berdych in the semi-final to set up a final against big-serving Canadian, Raonic.

Although Murray had won his previous five meetings with Raonic, the Canadian had made big strides under the coaching of John McEnroe and a close final was expected.

I never thought I'd be number one in the world”

At the Rio Olympic Games in August, Murray dispatched Juan Monaco, Fabio Fognini and Kei Nishikori on his way to the gold-medal match against Argentina’s resurgent Juan Martin Del Potro.

He battled through to win 7-5 4-6 6-2 7-5 and became the first man to win successive tennis Olympic Gold medals; having beaten Roger Federer at the London Games four years earlier.

Since the Olympic Games, a mix of injuries and a loss of form meant that Djokovic’s ATP ranking points tally fell substantially.

And with Murray’s imperious form, people started to wonder if Djokovic’s previously unassailable number one spot could be attacked by Murray before the end of the year.

The 29-year-old Scot won four tournaments in a row in China, Shanghai, Vienna and Paris to surpass Djokovic and do what many thought to be impossible at the start of the year.

It’s been a truly extraordinary 12 months for Murray, a statement proved by the fact that it’s incredibly difficult to pick between his achievements this year.

Murray’s latest accomplishment in a career which has seen so many successes has rightly sparked debate as to whether he is now Britain’s greatest ever athlete.

Of course, it’s a subjective argument with no right answer; but just to be one of the names in the hat shows how far Murray has come in the last 10 years. 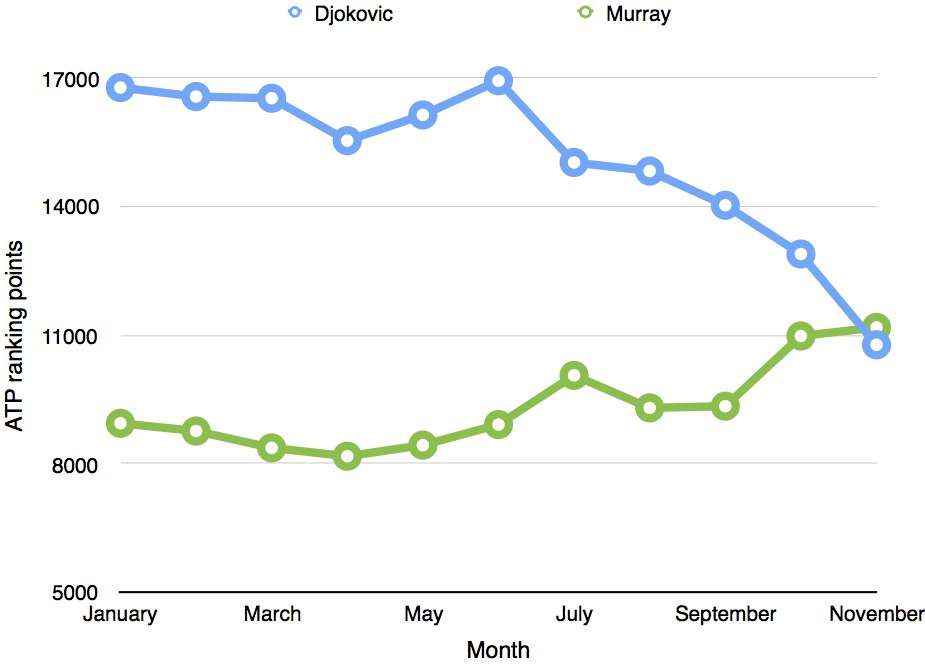