That is the end of our coverage of 'The Clash' this afternoon, I hope you enjoyed it as much as me.

Two early tries for Leicester had them in the driving seat, but a persistent Bath fightback was capped off with Anthony Watson's second try in the 72nd minute giving them a lead they would not relinquish.

Bath move fourth, and now control their own destiny in the hunt for the final play-off spot. If you're hungry for more rugby, Saracens v Harlequins at Wembley is underway, with the home team looking to secure a home semi-final.

From sunny Twickenham, over and out! 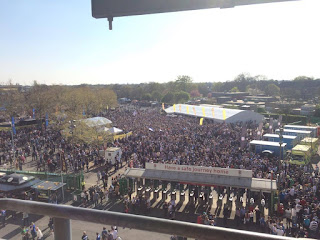 Will have enjoyed that one. You could feel the tension building in that second half but two brilliant Anthony Watson tries had Twickenham bouncing.

Matt O'Connor will be furious with the way his team let a 12-0 lead slip but Bath will be galvanised by the spirit they showed in that second half.

George Ford hammers it out - Bath have done it! What a game and what a win. They leapfrog the Tigers into fourth in the Premiership table.

It's one-out rugby from Bath as they try to close this one out but they're penalised for holding on in midfield! Owen Williams puts a huge boot into it but oh my word Rokodoguni has kept it in play with a piece of spectacular skill! Final few seconds now!

Bath have defended brilliantly in this second half and they repel several phases of Leicester attack before Francois Louw wins a penalty in front of his own sticks. Just three minutes left, is there a way back into this for Leicester?

We have a pitch invader! He goes corner to corner, stopping only for a high five from Jonathan Joseph before being tamed by the stewards. The sun does strange things to people. On the field, Leicester win a penalty and will look to steal this late. Owen Williams is on the field.

It's all Bath now. After a quiet first half, Anthony Watson is suddenly everywhere but Leicester are given a lifeline as the excellent Ford knocks on.

Leicester are stunned. They are behind for the first time today and the crowd is in full song now. Maxime Mermoz drops a regulation pass in midfield. If they're going to come back they'll have to do it with 14 men.

And explode they do! Bath go wide, Banahan runs a clever inside line and pops it up to Watson who sprints in untouched for the score! What a turnaround!

This could be a big moment. JP Pietersen sticks out a hand and knocks the ball on as Bath attack and after a quick TMO review Doyle has sent him to the bin. Tigers now forced to defend with 14. The crowd is ready to explode.

Oh we've got a finale on our hands now. Taulupe Faletau goes steaming through two defenders, draws the last man and gives it to Watson who canters in for a critical try. Ford hammers the conversion through. One point in it with 12 minutes to go!

He's looked good with the boot all day and the future Bath man nervelessly slots this one over to give Leicester some breathing room before hobbling back into his own half.

The Tigers just keep coming however, and brave Bath defence finally falters as JP Doyle awards the visiting side a kickable penalty. Burns will have a chance to extend the lead back out to eight.

Taulupe Faletau with a crucial intervention for Bath, earning a penalty with an excellent body position at the breakdown and keeping the Tigers at bay.

Leicester ship it wide looking for a crucial third try but Veainu spills it and Bath can clear their lines. Scotland international David Denton comes on to the field.

Now it's Leicester's turn to attack and Burns puts a cute chip out wide for Thompstone to chase but he's unable to keep it in play.

JP Doyle shocks no-one by awarding another penalty at the scrum. Both captains get a talking to, the set piece is threatening to spoil this game a bit.

Bath win a penalty just inside their own half and Ford launches them back into Tigers territory but O'Connor gets over the ball brilliantly at the breakdown to win a penalty and ease the pressure.

He knocks it through without a problem. Half an hour to go and it's still anyone's game.

Another scrum penalty. This time the way of the home team. And we have a bit of shoving after the whistle goes too. Ford will line up the kick to return the deficit to five.

Bath continue to press on the Tigers line but the defence is disciplined and Dave Ewers drops a regulation pass. Some frustration starting to creep in for Bath fans.

Adam Thompstone puts team-mate Veainu in all sorts of bother with a panicked pass near his own goal-line but the silky smooth Tongan escapes. From the resulting kick, Bath come storming into Leicester territory but we have a stoppage in play as Mathew Tait hobbles off injured, replaced by Jack Roberts,

Leicester turn the ball over well in Bath territory but it's spilled forward in contact moments later. The crowd responds with a bizarre hybrid chant of Bath/Leicester.

And his kick just has the legs to get over. Leicester take their lead out to two scores.

We've had trouble getting scrums completed today and Bath have again been penalised near the halfway line. Burns lines up a shot from 47 metres.

Freddie Burns launches the kick into the sky, a huge 40 minutes is underway...

The teams return to the field as we prepare for the second half. The Twickenham announcer is really trying to push this rivalry idea hard, crowd's smatter of cheers for Leicester suggest it might not be working.

Leicester will move six points clear of Bath on 55 points and put themselves in prime position for that final play-off spot. Huge 40 minutes upcoming.

What a game we have on our hands here. Leicester raced out to an early 12-0 lead behind O'Connor and Veainu's tries but Bath came back strong in the final 15 minutes and will believe they can win this from here.

It's not his cleanest strike and the ball drifts just wide to keep the score 10-15 at half time. Meanwhile, Tigers captain Tom Youngs has been forced off with injury, replaced by George McGuigan. An exhilarating half of rugby!

Time is up on the half but Bath aren't satisfied kicking it out. George Ford runs a delightful arc before switching it back inside to Faletau and the Tigers are in at the side at the breakdown. Ford will have a shot from 45 metres out to make it a two-point deficit going into the break.

This time it's the Tigers turn to be pinged at the scrum. Ford happily clears but Leicester are soon back on the attack...

A lovely training ground move from Leicester has Adam Thompstone through a hole and suddenly Bath are scrambling. A few phases later Leicester are over the line but the ball is held up well by Anthony Watson. Five metre scrum.

He strikes it beautifully and it sails through the sticks easily from 41 metres out. Eight minutes left in the half.

JP Doyle appears to be turning a lovely shade of maroon in the afternoon sun. He's not had to be too involved in the game yet which is usually a good sign but he does ping Bath at the scrum and Burns will have a shot at goal to restore the advantage to five.

Ford duly slots the kick. Just over ten minutes left in the half and we have a real heavyweight scrap on our hands here.

Now it's Bath's turn to crank up the pressure. Slick hands on the wing from Ford and Tapuai has them deep in Leicester territory before they earn a penalty for not rolling away bang in front of the posts.

Well they're back in it now! Bath sweep up field brilliantly and their speed at the breakdown is too much for Leicester to handle. The ball goes wide and it is that man Jonathan Joseph on hand to touch down. Ford nails the conversion and Bath are right back in it with 23 minutes played.

Leicester win a penalty at the scrum and Burns launches the kick into Bath territory as the away side look to further the early damage. Bath just haven't turned up yet and this game is in danger of getting away from them.

Genius. Sheer genius from Telusa Veainu. Leicester turn the ball over around halfway and he chooses to chip and chase with the cover defence missing. The kick is perfectly weighted and the flying full-back easily has the beating of Matt Banahan to touch down. Burns' conversion sails wide but Bath are reeling.

George Ford makes a clever half-break as Bath look to hit back fast but from the resulting breakdown an audacious pass is almost intercepted. The home side has the put-in at a scrum 40 metres out.

Leicester are in! JP Pietersen exploits some space out wide and when Ben Youngs returns to the short-side, Brendon O'Connor is on hand to finish expertly. Burns' kick sails through the posts. A perfect start for the visitors.

A first touch of the ball for Semesa Rokoduguni elicits a huge roar from the crowd but we're going back for a Bath scrum their side of halfway.

We're underway! George Ford launches the kick-off into the sunshine after a dramatic scoreboard countdown.

It should be an open encounter in perfect conditions here at Twickenham, although which team that will suit remains to be seen...

@benc34 I'm backing Bath. Should be a tight game but I reckon their backrow will win them enough penalties to sneak though.

Having dismissed Richard Cockerill earlier in the season, the Tigers parted ways with coach Aaron Mauger last week too, with Australian Matt O'Connor taking charge for the first time since 2013.

Despite the off-field distractions, the Tigers have already secured one piece of silverware this season, beating Saracens in March to claim the Anglo-Welsh Cup.

13:50 - Last time these teams met in the Premiership

These teams played the reverse fixture at Welford Road back in September, with the Tigers running out 34-14 victors. What they wouldn't give for a similar result today...

It's fourth against fifth in this hugely important game for both teams. Leicester are currently ahead by three points but victory for Bath today would put them in the driving seat heading into the final three weeks of the season.

Both teams have comfortable run-ins. Bath play Worcester (A), Gloucester (H) and Sale (A).

Leicester will be faced with Newcastle (H), Sale (H) and Worcester (A).

Win today and that team will control their own destiny.

Bath and England fly-half George Ford will be playing his future team today, as will his opposite number Freddie Burns in advance of this summer's swap move between the two teams.

We're half an hour away from kick-off here at sunny Twickenham, which gives us a chance to look at today's line-ups.

Sports Gazette is live at Twickenham covering today's huge encounter between Bath Rugby and Leicester Tigers, in a game being billed as 'The Clash'.